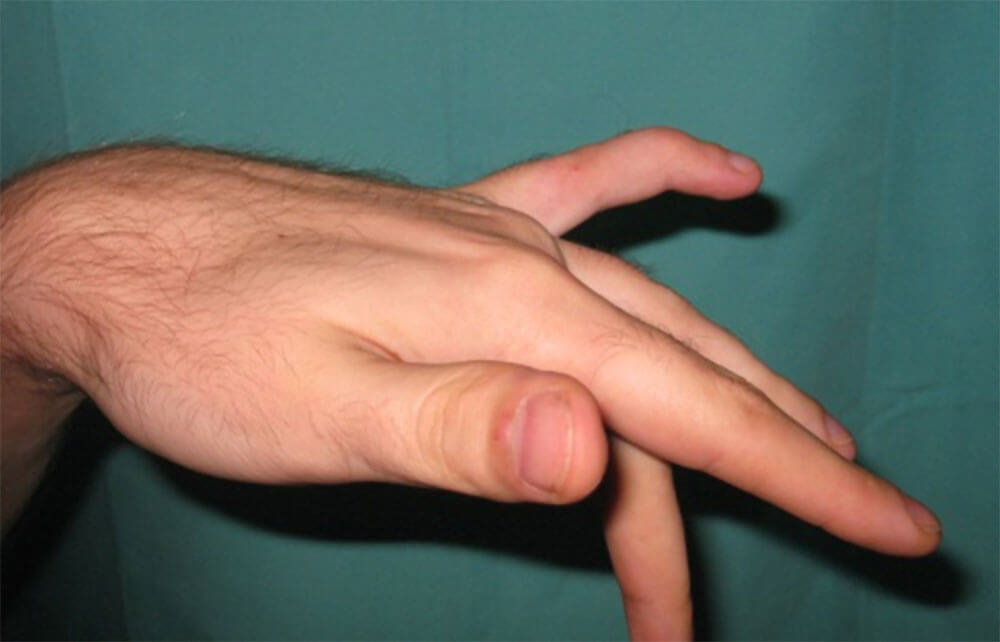 It commonly happens as a sports injury, but may as well happen when a deeper cut to the finger is made.

The injury may extend only to the tendon, or it may involve injuries and fractures to the bones in the hand or wrist.

Basic symptom is a drop (a bend) of the tip of the finger which can no longer be extended by will, accompanied by pain, redness, swelling and bruising.

Diagnosis is made by a clinical examination, with a few exercises, and an X ray of the finger from two directions must be made to exclude bone damage.

It can be treated non-surgically or surgically, depending on the time passed from injuring to reporting it to a doctor.

Non-surgically, it can be treated by immobilizing the finger for 8 to 10 weeks, after which it takes 2 to 6 months of exercising.

Surgically, it’s treated by a tendorrhaphia, a procedure that uses sutures to reconnect the ends of the injured tendon responsible for extending the finger. Immobilization and exercises follow this procedure as well.

A drop (a deformity) of the tip of the finger, the distal phalanx, after an injury to the extensor tendon.

The finger can be flexed in all joints, but the extension in the most distal joint is not possible, so essentially the tip (the distal phalanx) “hangs”. This phenomenon can occur on any finger, but it’s most common in the middle, ring finger or the little finger of the hand.

In rare cases, it is a diagnostical challenge to distinguish it from a fracture of the fingertip.

It usually develops after sports injury, usually after an impact by a ball, or after a fall, when we land on our fingers. During this types of injuries, only the tendon can be injured but a partial fracture of the fingertip bone can occur. Except for these injuries, which we call closed injuries of the hand, trauma to the fingertips by a sharp object (a cut) can in effect produce the same deformity when a tendon is severed in the cutting.

With blunt force trauma (without an open wound), the basic signs of the injury are:

With more intense injuries, there can be accompanying signs on the finger nail, in the form of a dark bruise or even a separation of the nail from the nail bed.

With sharp injuries, except for aforementioned signs, there is an open wound with bleeding.

Mallet finger is rarely seen as a congenital anomaly.

In most cases, a detailed clinical examination with fingertip extending and flexing function tests is enough, as well as a two way X-ray.

Complications mostly occur due to late or inadequate treatment, and they can be:

Treatment can be non – surgical and surgical.

Finger immobilization, – it’s applied in all cases of closed injuries with a tendon trauma, and in cases of partial discontinuation of the tendon. Only the fingertip with the distal joint is immobilized, with preservation of the mobility of the finger in other joints. The finger is immobilized in maximum extension, with a splint placed on the dorsal (back) side of the finger, from the tip to the middle joint. The finger is in constant immobilization for 8 weeks, and immobilized during nights for another 2 to 3 weeks. Another 2 to 6 months of constant finger-using exercises are needed, in order to get a good final result. Surgical treatment is rarely needed after this kind of approach. 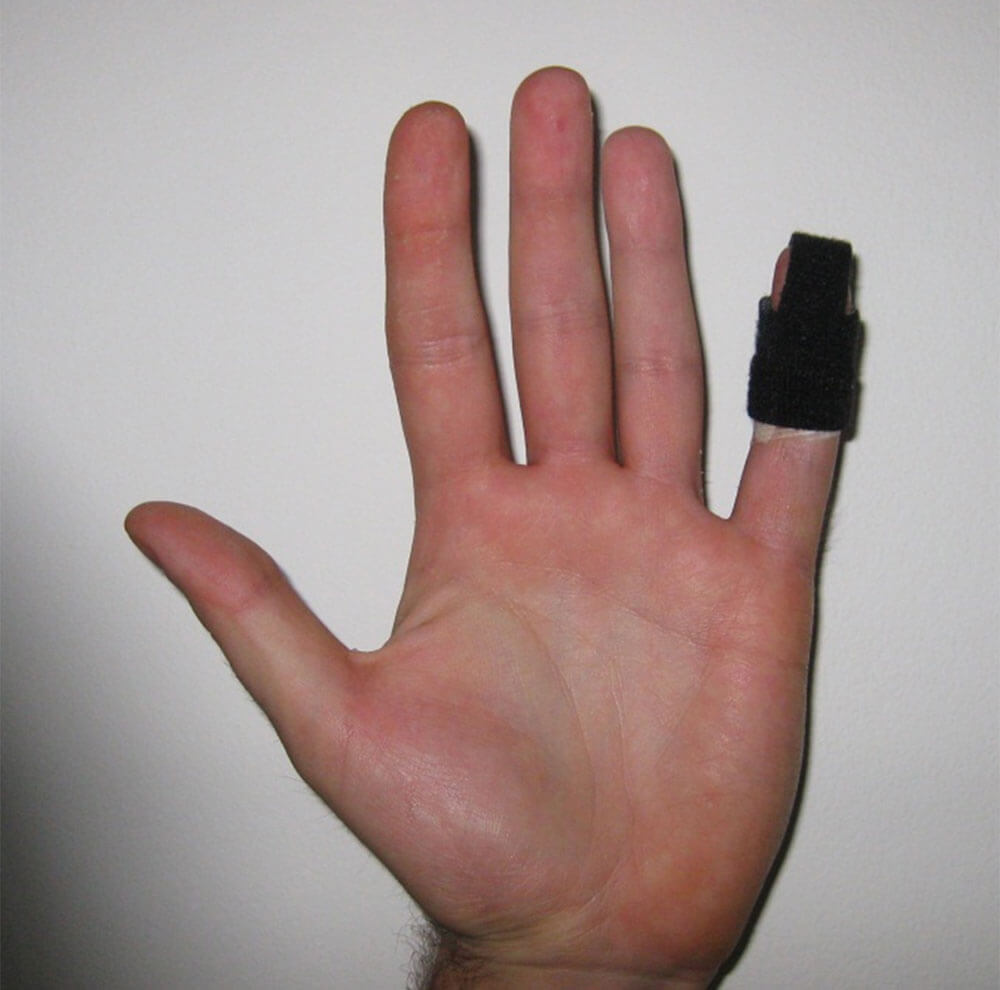 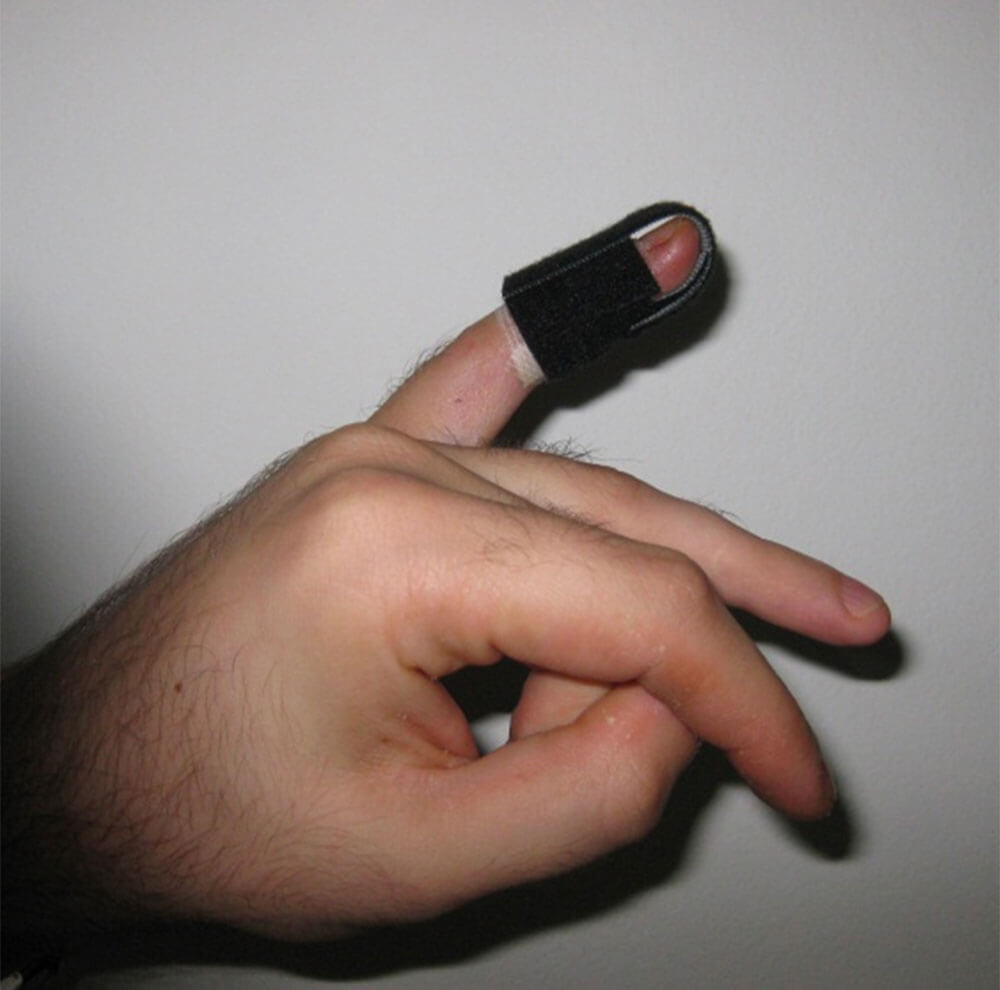 Tenorrhaphy – it’s applied in all cases when immobilization has not yielded a good result (1 out of 4 cases), when the injury to the finger is more severe, and in all cases of open injuries (when there is a wound). The fundamental goal of this intervention is to establish a continuity of the extensor tendon. In cases of chronic injuries, after a failed immobilization, and with non-treated injuries, a non-functional scar forms on the ends of the tendon, which needs to be removed (excised), before establishing the continuity of the tendon. Immobilization with a needle or a fixating screw is necessary only in rare cases. 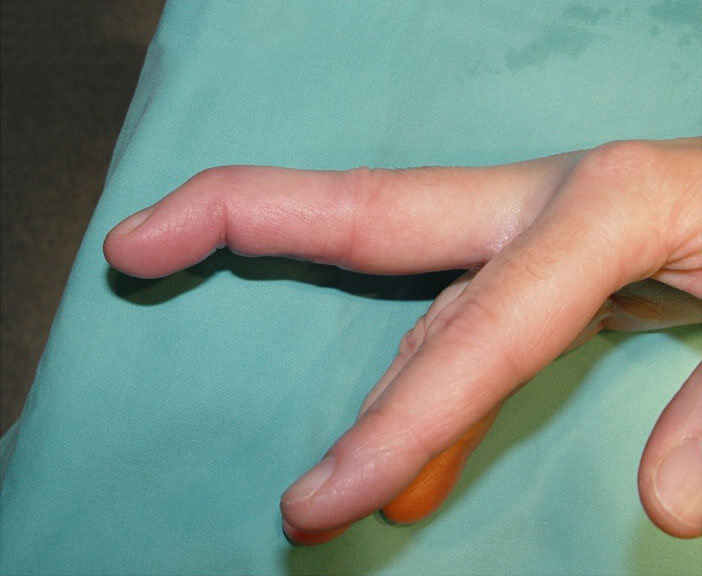 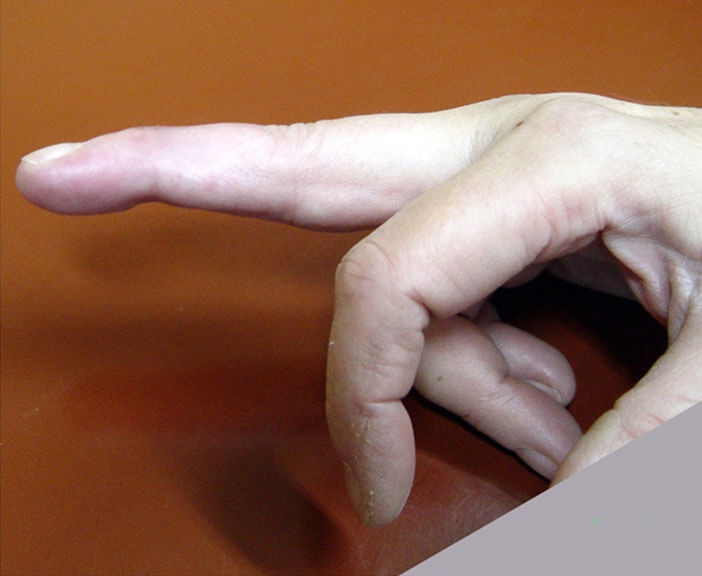 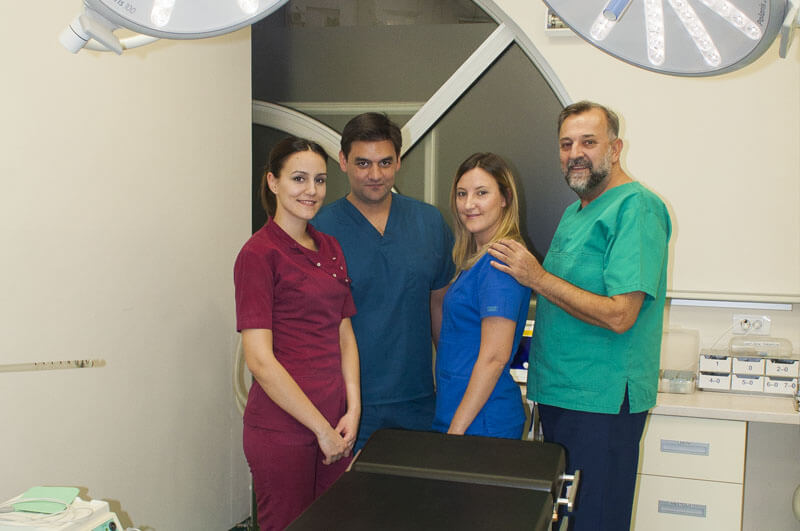 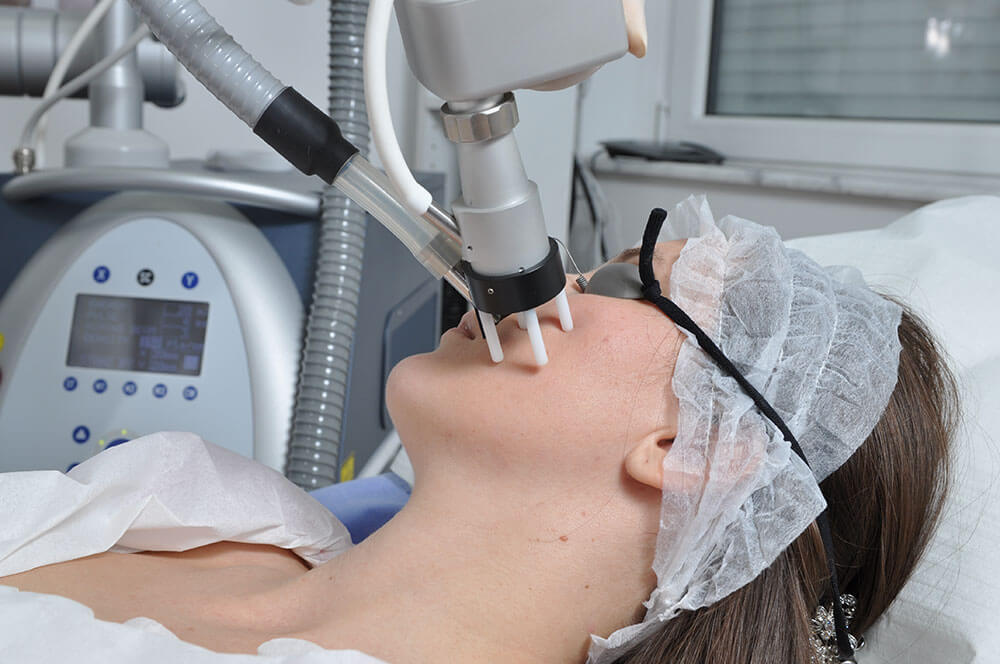